A heartfelt review of Pam Grout’s book E-Cubed, where she teaches us to play in the quantum field 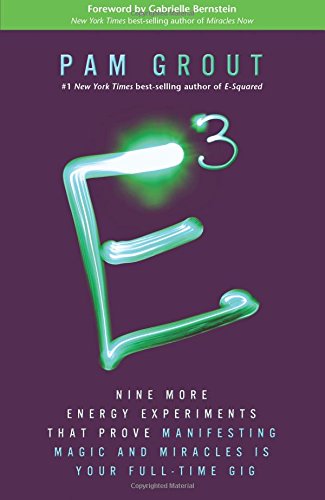 As I write the words of this book review, I sip the “Magical Weight Loss Potion” that I energetically created a few minutes earlier, using Pam Grout’s suggestions in Experiment 8. I’m proving that my beliefs are changing my physical body through a harmless placebo (spring water) that I altered simply by using my personal energy and my intentions.

I’ve convinced myself that my magical elixir is the healing tool that will curb my nighttime snacking and cause a drop in weight over a 3-day period. Every time I pick up my glass to take a drink, I thank my magic potion for its good work. It feels right to do and, in fact, I’ll continue this activity for at least a month, to prove my point… and lose weight at the same time.

And that’s the point of Pam Grout’s newest book E-Cubed.

A sequel to her highly popular E-Squared, E-Cubed continues to jostle our age-old beliefs about ourselves and the universe we live in. As a student of metaphysical teachings for 25 years, I was already pretty much in alignment with Grout’s ideas in the first book, but she explains things so clearly… and with enough scientific proof to really cement in the new ideas that I pre-ordered E-Cubed before it was released.

Of course, it’s tough to delete or even revise concepts we’ve had for decades, ideas and beliefs we grew up with and “rules” that are reinforced by churches, governments, and parents. Grout acknowledges this at the outset. And then hands over responsibility for belief restructuring to us, by means of 9 experiments that prove what she is saying.

Grout introduces us to Worldview 2.0 which shows us how the energetic world most of us can’t see is the foundation on which everything else rests. Scientists often call this energy “The Field,” and Grout explains in very clear language how we, as humans, can impact the energy around us – our life, in other words – by our thoughts, words and intentions. She points to the “observer effect” in quantum physics which says that it is impossible for us to look at something without impacting whatever it is we are looking at.

My spring water, for example. My conscious belief in its miraculous properties to curb my snack attacks has created a new elixir that is going to work as long as I believe strongly that it will. 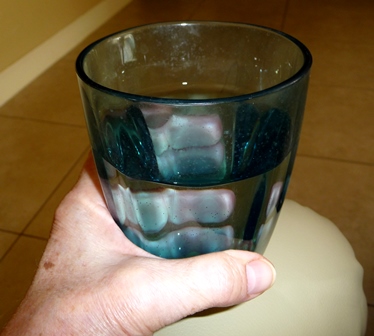 I found the chapter on synchronicity to be quite revealing and underlined a few sections so I could find them easily when I needed a reminder that “coincidences are a glimpse into the underlying order of the universe.” We can never feel alone when the connectedness of all things aligns into solutions that help us out when a strong need arises. I’ve also heard it said this way: “The Universe conspires in our favor.”

Each of the 9 experiments is designed to prove a point, whether it’s “finding” money in the chapter on changing money beliefs or understanding that all of nature is sentient and could have messages for us, if we would just notice and listen.

The first 60 pages of E-Cubed present the theories that Pam Grout wants us to prove through her experiments. Like Pam, these are more than theories to me; they are more like a way of life. But for many, they are new (possibly disturbing) ideas that contradict many (most) mainstream teachings.

Who has ever told you that happiness is the big game-changer? Who urges you to start the day with “happy” music? Who claims that the more fun you have, the better your life will work? Well, Pam Grout does, for one.

Fear is such a motivator, one wonders why it’s so prevalent. Is it on the school curriculum? Is it the method through which businesses remain financially secure? Is it how governments maintain such control over people’s lives?

Pam Grout, in her two books, attempts to hand control over our lives back to us. She does this in plain language with convincing examples of how we gave so much of ourselves away. She isn’t into judging, casting blame, or advocacy. She just explains it.

And presents a few ideas of what we can do about it.

As a “senior citizen” in a culture that doesn’t value its elders, I’m all in favor of tapping into as much help as I can get from the field of infinite potentiality. I know it’s there; I’ve had personal evidence of it. But I haven’t got the hang of using it in a consistent way yet.

I’d like to get better at receiving messages from the unseen worlds, for example. Not because I’m preparing to cross over to where they are – not yet! But because I’m semi-retired and have the space in my life where I can do this now. Life is so full of possibilities – and I’m ready to experience and enjoy them.

Books like E3 remind me to expand my life’s options, rather than contract into the stereotype of old age. And, I can honestly say that I feel more fired up than I have in a decade or more.

P.S. -Here’s a link to the first book, if you haven’t read it yet: E-Squared: Nine Do-It-Yourself Energy Experiments That Prove Your Thoughts Create Your Reality