Our book club loved Outlander by Diana Gabaldon… and then read the rest in the series, like I did (for the second time) 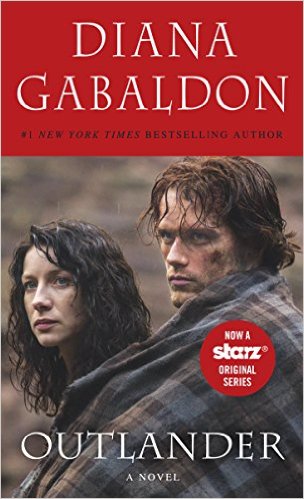 I re-read Diana Gabaldon’s Outlander for our book club… and got so caught up in the story again, that I devoured the entire series – for the second time. Here’s my review of Book 1.

Outlander is the first in a series of eight books (so far) written by Diana Gabaldon. I was introduced to this wonderful series by a librarian sometime in the 1990s, when only the first two or three of the books were in print. Then had to wait what seemed like eons for the next one to be released.

Outlander was back on my mind because it was our book club choice three months ago. Luckily the member who suggested the book gave us lots of warning and, at 850 pages, we needed it. I downloaded the book to my Kindle so I could savor the story at my leisure, without worrying about getting it back to the library in 4 weeks. What am I saying? There wasn’t even a copy available in the county’s entire library system… they were all out. It’s that popular.

Categorizing Outlander is not easy, to be honest. We could call it historical fiction, fantasy, romance, or adventure… and, in fact, it is all of those. Spanning the years from 1743 to 1945… Outlander takes us from the edges of World War II in Europe back to the Highland uprisings of the 1740s and the Battle of Culloden (in that order).

Oh… did I mention the time travel? The standing stones?

Claire Randall, the heroine of the story, accidentally slams back in time from 1945, having just completed her stint as a wartime army nurse, to the year 1743 when she happens to run into a man who was her husband’s great-great-great-great-great-great-grandfather. His name is Black Jack Randall… the “bad guy” of the tale. But she is rescued from the clutches of this nasty fellow by James Fraser, a Highlander who is younger than Claire by a few years… and who is one of the most memorable characters ever written into an historical fiction adventure. The relationship between 20th century Claire and 18th century Jamie turns into one of the best love stories – ever.

Diana Gabaldon is a fabulous story-teller

Diana Gabaldon’s story-telling is so adept that you feel completely engaged in the deep, deep love that develops between Claire Randall and Jamie Fraser… a love that grows over the entire series. I don’t want to give too much of the story away if you haven’t read the books yet, but you must trust me on this one. If relationships are your thing, this is one of the best-developed I’ve come across in a series of novels.

I’ll mention, too, that the history is well-drawn and accurate. The adventures are gripping, the battles heart-wrenching, the “evil-doers” as nasty as you like. The story drew me in and hasn’t let me go 15 or more years later. I’ve been waiting, like the rest of Gabaldon’s legion of fans, for the new book to come out. It’s finally here… and I’m reading it with relish. This is a story worth following, in other words.

Intrigued? You can check out some of the 14,546-plus reviews by clicking on the book’s cover, above or right here.

If you’re not familiar with Highland history or the Battle of Culloden, the videos in this documentary will fill in some of the blanks.

Are you collecting the Starz DVDs? Here they are for Season 1

Amazon has 5 of the Starz Outlander seasons on DVD.