I Became The Tutorial Lady Kind Of By Accident 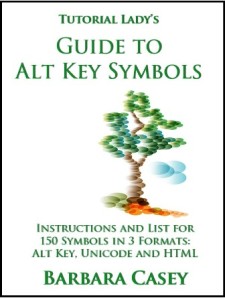 I did not set out to have a career as The Tutorial Lady. My tutorial writing started because of a need I noticed and so I just took it upon myself to fill it… with a how-to tutorial.

It all started back in 1994, when I bought a rather early version of CorelDraw to make graphics for a holistic directory I was publishing. Included with the software was a sheet of Alt Key shortcuts.

Whoa! Here was a way to make the copyright symbol, which I absolutely needed for book publishing. And there was the shortcut for bullets! And French accents! I felt like I had entered a secret room which not many people knew about… back in 1994.

I had a whole page of keyboard symbols that made life so much easier and, meanwhile, everyone else was using asterisks for bullets and apostrophes for acute accents.

Here’s what happened next…

I went on to edit and publish 5 editions of the Directory between 1995 and 2002, when the internet took over as the go-to reference resource for metaphysical and holistic practitioners.

But I hung on to the sheet of keyboard symbols that whole time.

Between the shortcuts on the CorelDraw list and more I discovered on my own, I had enough material to make a 2-page PDF list containing 300 Alt Key symbols, which I sold for 99 cents on my website. I also made a web page which included the most frequently requested Alt Key symbols. This was back in in 2006. 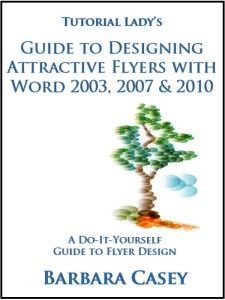 More PDFs and website tutorials… and a new brand is born

In the meantime, I had acquired many clients for whom I designed flyers for their classes and workshops. I typically created the flyers in CorelDraw or Microsoft Publisher, which are pretty good desktop design tools.

But most folks wanted to save money and update their own workshop information by changing dates, times and places themselves. In other words, they wanted their flyers created in Microsoft Word.

So I went through every step of creating a flyer in Word 2003 and posted the instructions in great detail on my website in 2007. I eventually put this tutorial on Squidoo (now HubPages) and added Word versions 2007 and 2010, as each new one came along. I made a PDF report for that tutorial, too.

And don’t even get me started on spelling bloopers. I got so frustrated reading it’s when its was called for. Ditto for the confusion people were experiencing with your and you’re. Another tutorial was the result. See a need and fill it… that’s all I did. 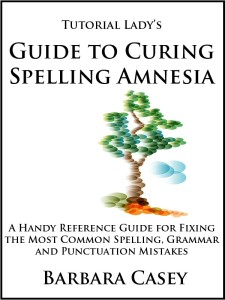 It dawned on me that I should really “brand” myself, based on what I was doing and so I became “The Tutorial Lady.” I ended up with numerous tutorials on my blogs and HubPages.

I have since returned all three tutorials (which had been at various times on my website, a Tutorial Lady blog, Squidoo and HubPages) back “home” to the blog with my name on it.

3 of my tutorials are available for Kindle at Amazon.com!

In November 2011, I uploaded my first Kindle e-book to Amazon and, in January, two more tutorials followed. Even though you can see most of the same information for free on my Tutorial Lady blog tutorials, a lot of people like to have their how-to lessons handy. If you need a quick look to see if its or it’s is correct, all you have to do is grab your Kindle.

So I now have Kindle e-books for: Keyboard Symbols, Word Flyer Design, and Curing Spelling Amnesia.