These 10 classic films are etched in my memory so vividly, the cinematography so suited to the black and white medium, the lighting so perfect, that color would detract from the overall effect.

As a woman of a certain age, I’ve seen my share of black and white films at movie theaters and drive-ins both. And later on television… in black and white… until color TV became the norm rather than the expensive exception.

The movies reviews on my “black and white movies” list are in no particular order of importance or chronology. And they are some of the very few movies I’ve ever watched more than once. You’ll see the reasons why below. 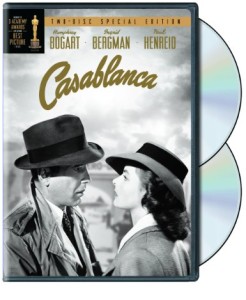 When I was a kid, Humphrey Bogart was still a big deal. My favorite Bogart movie isn’t Casablanca at all. It’s The African Queen, but that movie was filmed in color and not eligible for this list.

Casablanca has so many memorable quips, scenes and THAT song… it haunts you afterward, doesn’t it? “You must remember this, a kiss is just a kiss.” Why couldn’t Humphrey Bogart end up with Ingrid Bergman?

Released in 1942, the Casablanca story line was obviously influenced by events in Europe and the “stiff upper lip” ideal – giving up the love of your life for the greater good – was an uplifting message for a world at war.

Here’s a synopsis of the story for those who haven’t seen it yet. Set in Morocco during World War II, the movie showcases a two-fold storyline. There’s the love story angle between Rick Blaine (Humphrey Bogart), the owner of a Casablanca nightclub, and Ilsa Lund (Ingrid Bergman), who reappears in his life after a number of years, married to an important underground leader, Victor Laszlo. Rick’s and Ilsa’s past relationship was the romantic apex of both their lives and we wonder until the end of the film… will she or won’t she live for love instead of duty. The second theme of the film is really a propaganda vehicle for the allies in World War II. Who will “go along” with an occupation by the Germans and who will resist… or leave?

Casablanca has some of the most memorable one-liners ever found in a single movie. “Play it again Sam” wasn’t one of them, however. It is really just “Play it, Sam.”

Other memorable quotations directly from the film include this one: Rick, speaking to Ilsa in one of their more poignant moments, “We’ll always have Paris.” How many times have you heard that line? And Rick, again, with one of the best closing quips of any movie: “Louis, I think this is the beginning of a beautiful friendship” – as Rick and Louis (the city’s chief of police) start their exit from Casablanca the city and Casablanca the movie. 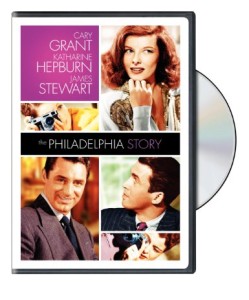 The Philadelphia Story on Amazon

The Philadelphia Story is one of my favorite movies of all-time, with snappy writing, superb acting and great cinematography. Jimmy Stewart won an Oscar for best actor in this movie, though I think it was really a toss-up among all three main actors. Katharine Hepburn plays Philadelphia socialite Tracy Lord, recently divorced from C. K. Dexter Haven (Cary Grant). She’s about to be married to a real numbskull, but she’s the only one who can’t see it.

Attending the festivities are two newspaper reporters, Macauley Connor, played by James Stewart and his wise-cracking sidekick Elizabeth Imbrie, played by Ruth Hussie (nominated for supporting actress). Most of the action takes place the day before and the morning of the wedding.

Based on a Broadway play of the same name,The Philadelphia Story was released as a movie in 1940 and featured three of the biggest stars of the day.

If you haven’t seen this movie, it’s really worth a watch. The acting is superb, the writing even better. 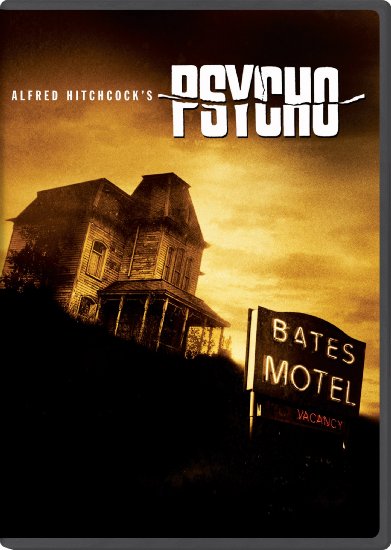 Psycho – Still scary after all these years

A 1960 horror/suspense movie by Alfred Hitchcock, Psycho rocked my little boat and almost capsized it when I saw it in the movie theater the year it first came out.

Anthony Perkins is so deliciously creepy in this movie that I had difficulty watching him in films for years afterward. Janet Leigh was so “terminally” eliminated in this film that I don’t recall seeing her in any other movies after that. The “shower scene” was one of the most talked-about movie scenes of its day, when that type of violence just wasn’t being shown on the big screen. Three minutes of murder.

And when Norman Bates’ mother turned around… well, if you haven’t seen the movie, I’m not spilling the beans here. But I’m pretty sure I screamed just a little, even though I’d heard there was something pretty gruesome about to come.

A replica of the Bates Motel, where the movie took place, is at Universal Studios in Orlando. Gave me the creeps just walking past it. The original still sits on the Universal lot in Hollywood.

Psycho is a classic every movie buff should see, because it’s Hitchcock and because of its ground-breaking scenes. I can’t imagine seeing this movie colorized. It’s so dramatic as a black and white film. 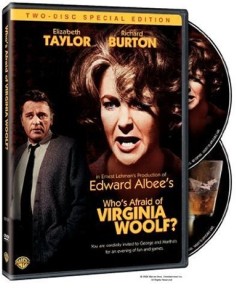 Adapted from Edward Albee’s stage play, the movie version of Who’s Afraid of Virginia Woolf is a searing look at the most dysfunctional couple ever portrayed on film.

If your only experience with Elizabeth Taylor movies is Cleopatra, this one will blow your mind.

Elizabeth Taylor, who vamped it up in Cleopatra gained 30 pounds for the role of Martha and won an Oscar for her portrayal of the hard-drinking shrewish, anguished wife of milquetoasty college professor, George, played by Richard Burton. Most of the “action” is hard-hitting dialogue between George and Martha with a little nervous tension added by supporting cast members Sandy Dennis and George Segal (yes, of Just Shoot Me!). Segal and Dennis were both nominated for their respective supporting roles. She won; he didn’t.
They all should have.

(5) Sergeant York – A Gary Cooper film that stays with you 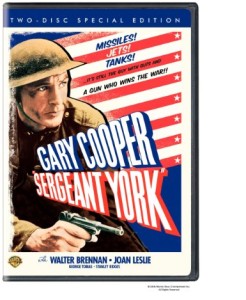 Sergeant York is based on the true story of Alvin York, World War I’s most decorated American soldier. The “movie” Sergeant York – Gary Cooper – won the Oscar for Best Actor at the 14th Academy Awards.

What’s interesting is that the real Alvin York resisted having a movie made about him at all… and would only relent if Gary Cooper played the title role. He got his wish… and an excellent movie.

The stark black and white photography mirrors the horrors of World War I and the anguish of a conscientious objector who makes the decision to fight for his country (well, a European country, at any rate). I’ve watched this movie many times, and it never feels stale or old-fashioned. Great film-making.

The film character Alvin York is ranked 37th out of the top 50 heroes in American cinema.

(6) To Kill a Mockingbird – The “ultimate” Gregory Peck movie 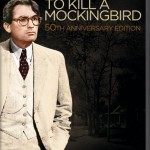 To Kill a Mockingbird

Gregory Peck won the Oscar as Best Actor for this movie adaptation of Harper Lee’s Pulitzer Prize-winning book To Kill a Mockingbird. In fact, the author has never permitted a remake of the film insisting it couldn’t have been made better than the original 1962 version.

Even though color films were being made by the 1960s, the director, Robert Mulligan, deliberately chose to film in black and white. This allowed a crisper focus on the drama and also the racial issues portrayed in the movie. 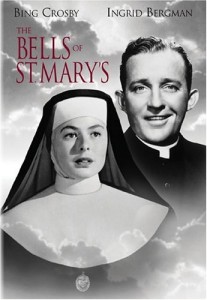 The Bells of St. Mary’s

Bing Crosby plays a priest, Father O’Mally, who originally arrived at St. Mary’s Catholic School with the intention of shutting the derelict building down so its students could be transported to a newer, more modern school. The nuns, however, were having none of that. Led by Sister Mary Benedict (Ingrid Bergman), they dug in and tried to save the school for the local kids.

Bing Crosby played a priest in the movie Going My Way for which he won best actor Oscar. But this movie is usually shown on TV around Christmas time and has a lovely, endearing message that… just makes you feel good watching it.

According to a post on Wikipedia, adjusted for inflation, The Bells of St. Mary’s would be the 50th highest grossing movie of all time. You can catch it on television around the holidays or consider adding it to your classic black-and-white movies collection on DVD. I’ve seen it many times and the story holds up well. 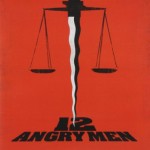 12 Angry Men is a terse, tense courtroom drama that takes place primarily in the jury room, where 12 men try to form a consensus on the guilt or innocence of an 18 year-old boy, charged with murdering his father.

Eleven of the jurors’ minds are made up and they’re ready to vote and go home. The dissenting juror, played by Henry Fonda, wants more discussion before they condemn an 18 year-old to a death sentence

The conversations are heated, the acting off the charts and, with any luck, your jaws will unclench in two or three days after watching this movie.

It’s a must-see for movie buffs, for the camera work alone. 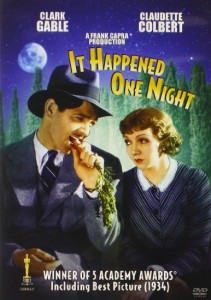 It Happened One Night

It Happened One Night is a Frank Capra comedy classic with superb acting and dialogue.

Clark Gable plays an out-of-work newspaper reporter who meets a spoiled heiress, played by Claudette Colbert, on a bus. She’s running away to meet her fortune-hunter husband, whom she married against the wishes of her very rich father. He recognizes her and pretty much blackmails her into letting him write her story if he helps her meet up with hubby dear.

Long story short, rich girl runs out of money and has to rely on poor reporter. Some of the funniest scenes take place in a motel room they are forced to share, where, supposedly, “it” happened. It didn’t, but love did. This film has some of the snappiest dialogue and Clark Gable is his usual dishy self (remember, he was a rising Hollywood star in the 30s). Colbert is one of the best comedic actresses of that period and the fireworks explode all through the film

Watch it if you can. 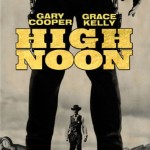 Gary Cooper and Grace Kelly star in this classic western movie filmed in black and white.

Town marshal Will Kane (Gary Cooper) stands up against four gunslingers who have been terrorizing the local citizens. The town would rather hide than fight and Marshal Kane ends up meeting the bad guys in a gunfight at high noon. His wife, played by Grace Kelly, would prefer he didn’t.

Cooper won an Oscar for High Noon as did the haunting song, Do Not Forsake Me, Oh My Darlin’ sung by Tex Ritter (see the YouTube video below).