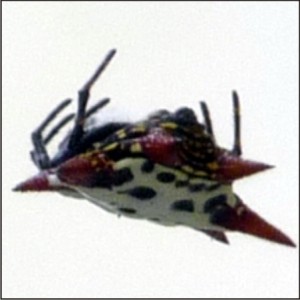 When we moved into our new apartment in April 2013, our next-door neighbor turned out to be a spiny orb weaver spider. At the time, I didn’t know what type of critter she was… I just knew that she was a pretty funky-looking arachnid, weaving a spider’s web that held her through windstorms, rainfalls, and dive-bombing birds.

I’m not typically a fan of spiders and shoo them away at the first (safe) opportunity. But this little lady was different and, so, we let her huge web stay in place and just let her be.

Until the lawn guys chopped off the palm frond that held her great big silky home in place.

The travels of this intrepid orb weaver are documented here and I hope you enjoy weaving your way (pun intended) through the Carlotta Saga. I don’t know yet if it has a happy ending. She’s had a pretty rough time of it.

I started calling her “Carlotta” because it’s the Italian version of Charlotte, the name given to another orb weaver… a very famous, fictitious spider who befriended a little piglet named Wilbur. You know who I mean, right? Except she wasn’t spiny… just “barny.”

Here’s another closeup of a spiny orb weaver spider

While the spiny orb weaver spider may look ferocious, it’s actually harmless to humans… and beneficial for gardens.

Judging from the number of little wrapped-up bugs I saw in Carlotta’s finely woven web, I’m sure she was keeping our 2nd floor balcony free of flying insects, too.

With the fancy-sounding Latin moniker Gasteracantha Cancriformis, spiny orb weavers are colorful spiders that are easy to spot when they’re hanging in the middle of their beautifully-shaped webs. Carlotta has red markings similar to the orb weaver pictured here. I couldn’t get close enough to take a photo that showed her colors this well, though you’ll see her in typical upside down repose in the picture above (taken with my Panasonic Lumix from the side of the balcony).

Is Carlotta bringing me a message? – Why is this spider hanging around here?

When I told my friend, Ferne, the story about our little “web-centric” critter, she immediately said, “Spider Medicine.” Ferne’s very intuitive, so I got out my Medicine Cards and hunted for the card with the spider on it. You can see the #43 card in the introduction above. 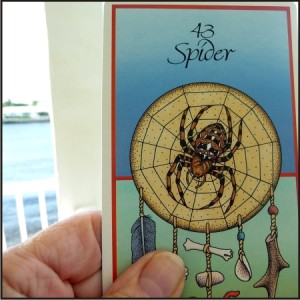 Animal totem lore says that Spider wove the first primordial alphabet. In fact, you can almost see the outlines of letters and symbols in any well-shaped web. What does an alphabet do? Make words. What do words do? Weave stories.

It sounds as if Carlotta’s presence is a reminder to start writing more. I got off track the past few months moving house a couple of times and haven’t written on my blog or anywhere else, for that matter. Until now. Thanks to a spider.

I love the Medicine Cards book because the information always hits true – and believe me, it hits.

The Spider card description mentions how a spider’s body is shaped like the number 8, the symbol for infinity, suggesting “infinite possibilities of creation.” Not to mention it’s the female energy of the creative force. Oh, man… how big a two-by-four do I need to be hit with? “Create, create, create,” the book says.

Carlotta lost this home when the lawn guys cut off the palm frond that held her web in place. You can see her in the middle of this amazingly complex dwelling-place she had woven.

For days, I saw her hanging onto a single brown leaf that just drifted and swayed about in the wind. I think she was building up her silky web supply during that downtime because she did create a web higher up in the tree later on.

Until one morning, there she was, hanging on a thread right above the railing of our balcony. The front railing, where I stand every day to watch the dolphins and take sunset photos.

The saga continues below.

Carlotta’s next home was here 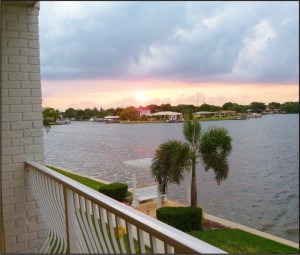 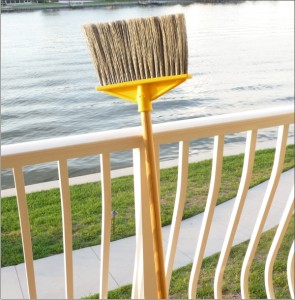 It was pretty unnerving to sit sipping coffee on the balcony with a spider hanging down in front of me, so I got out my trusty balcony broom and gently nudged the threads of Carlotta’s web over to the side of the balcony. I don’t go over there much and I wanted to direct her back toward the palm tree, where she had previously resided.

And it worked, pretty much. You’ll see a picture below of Carlotta suspended between the apartment building and the palm tree, creating a brand new web.

She stayed there for a few days and then… disappeared! I kept going out onto the balcony hoping she was just taking a rest, like she did after the palm frond-chopping incident but, so far, I haven’t seen her. I’ve walked around all the trees on our side of the building and… no Carlotta.

She’s a resilient little thing, though. She hung on for dear life through Tropical Storm Andrea, so I’m hoping I’ll look out one day, and there she’ll be again. I’ve seen the threads of her web glinting in the sunlight… just no sightings of Carlotta.

The saga continues… I hope.

The dot in the middle is Carlotta 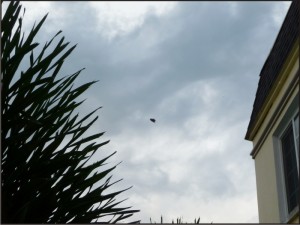 The drama continues … but still no Carlotta

This past Thursday, I could see some of Carlotta’s web when the early morning sun was shining through it. So I took heart that maybe she was somewhere nearby… just out of sight. 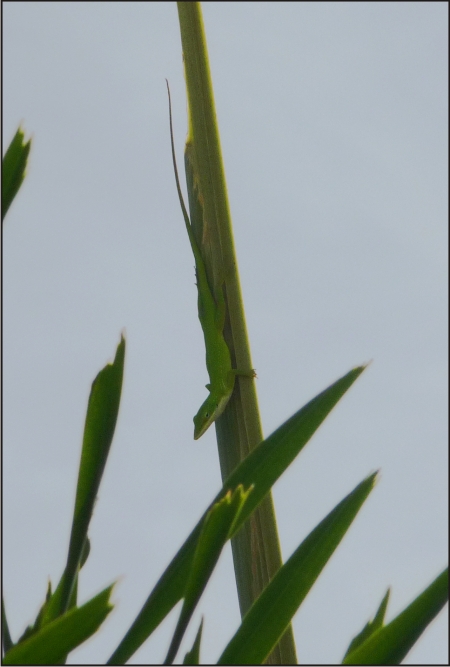 Did the lizard eat Carlotta?

On Friday, I couldn’t see the webbing anymore, but this fairly large green chameleon (lizard thing) was looking down from the top branch of the palm tree. There he is in the picture to the right.

I sure hope Carlotta didn’t end up being a reptile’s lunch.

I’ll keep looking for her… but I’m starting to lose hope that she’s still around.

And it’s just possible that now she has served her “messenger” purpose for me, Carlotta has gone to bring her spider medicine to another blocked writer… who needs her more than I do.

Postscript: Two days ago, I searched the palm tree… again… for Carlotta and found – a very tiny spider making a very large web. I’m wondering if Carlotta did hide away to have babies and this is one of them. I can’t tell yet what kind of spider it is, though. It’s really, really small.

P.P.S. I haven’t seen the baby spider for days now. We have a lot of lizards here and I’m wondering if one of them caught hold of our itsy bitsy spider.

One year later… I’ve learned that spiny orb weavers live only one season and head off to spider heaven after they reproduce. This year, there’s a much smaller spiny orb weaver making a web under the stairs at our apartment complex. And it’s too dark to get a good photo.