Why would Mike Rowe write a “fake” book? 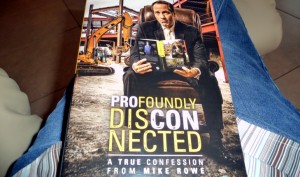 If you’ve seen Mike Rowe’s television show “Dirty Jobs,” you’ll know he has a quirky sense of humor, and that comes through loud and clear in his “non-book.”

In fact, the book contains 154 pages, including a foreword (written by his mother), a proper – and hilarious – preface describing his first “dirty” job, an introduction that explains the reason for this book, the 1-page confession alluded to in the book’s title, the afterword, 35 blank pages (actually half of them are lined), a 98-page appendix of articles and previously published pieces, a 12-point “sweat pledge” and 2 pages of acknowledgements.

You could skip to page 3 and read the “real” book, or sit back in your recliner like I did and enjoy the Rowe-isms we fans have come to know and love. 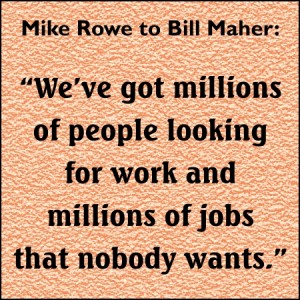 Profoundly Disconnected is a fundraising tool. While the book revels in sewer jokes, animal fertility quips and various on-the-dirty-job faux pas, Mike’s reason for publishing Profoundly Disconnected is to raise money for his non-profit foundation MikeRoweWORKS, an organization he launched in 2008. Initially started as a message board for skilled jobs, MikeRoweWORKS grew into a foundation, a scholarship fund and a PR campaign for skilled labor and alternative education.

For 8 years, the Dirty Jobs show on Discovery Channel sent Mike Rowe into hundreds of somewhat out-of-the-ordinary job sites where he played apprentice to seasoned workers who knew what they were doing. He worked in sludge, poop and other icky stuff while delivering his quips and describing the frequently interesting inventions portrayed in the episodes.

During the series, Mike gained an appreciation for people who worked hard at jobs that made life easier for the rest of us. As he said, “Somebody’s gotta do it.”

Starting a PR campaign to reduce the stigmas around certain kinds of jobs grew out of his TV show experiences. As Rowe researched further, he saw how vocational education had been downgraded and ultimately removed from most school systems. That led him to question how America would be able to repair bridges or fix old roads without skilled laborers.

And, for the most part, the skilled labor pool is NOT available in the United States at this time. When there are 3,000,000 unfilled jobs existing alongside record-high unemployment, there’s a disconnect, says Rowe.

Further, after decades of pushing students to get 4-year college degrees that teach no job skills, the education system (parents and politicians, too) is now faced with the reality that no one is learning how to repair the country’s infrastructure. 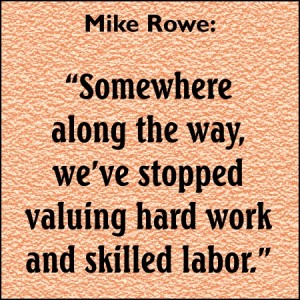 Innovation and technology in the skilled labor workforce

If it sounds like Mike is stuck in the past, that’s not the case at all. He’s tremendously excited about the role of innovation and technology in the workforce. If you remember the show, it featured a lot of inventors and truly creative entrepreneurs who saw a need and found a unique way to fill it.

In Profoundly Disconnected, Mike Rowe gets his message across, with lots of humor, his usual candor, and heartfelt requests that we think differently about the nature of work. In the appendix, Mike revealed some of the more controversial subjects he has tackled over the years, including the OSHA versus farmers “ladder incident” and the “Safety Third” kerfuffle.

Mike Rowe doesn’t mince words and this helps him get conversations going about what’s important to him. And that’s valuing hard work and skilled labor.

He’s a man on a mission and he wants us to join him. If you’d like to help out, here’s the link to Mike’s book Profoundly Disconnected

Currently, it’s only available on Mike’s page on eBay.