Thom Hartmann reviews the “cycles of crisis” in the U.S. since the American Revolution 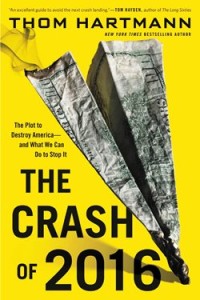 In The Crash of 2016, Thom Hartmann documents why it is no longer wise to put faith in most elected politicians, or in our once-trusted institutions, especially the public media, banks, universities and the Supreme Court.

Maybe I’m more naive than most people, seeing a half-full glass, but the documentation in Hartmann’s book looks real, sounds scary, and makes me want to find a bolt-hole where I can make my own electricity and provide my own food. Soon.

Published in 2013, The Crash of 2016 outlines very clearly how the rich get richer and the poor get poorer… in fairly predictable cycles since the United States of America was founded.

Thom Hartmann claims that the U.S. is teetering on the edge of the “fourth great crash and war” in its history and that 2016 is the approximate timing for this to occur.

Hartmann presents a convincing case for this, citing eighty-year cycles between the three previous major crises faced by United States: the American Revolution, the Civil War and the Great Depression. Each event involved “horror and bloodshed,” but also subsequently brought about changes to the status quo that allowed America to grow and flourish.

The cycles all involved periods of oppression, followed by rebellion, resulting in reformation. When enough generations had gone by for citizens to have forgotten what happened during the previous crisis, the process repeated itself. Three times, so far, in this country.

Events of the 80 years since the last depression show all the indications that the fourth big crash will come around the year 2016.

The Plan to Destroy the Middle Class

Hartmann names names, too, from the economists who steered the politicians onto a slippery slope to the banksters who engineered multiple government collapses around the globe. He cites the U.S. presidents who pushed corporate agendas over the public good… including those who started with good intentions until threatened by the financial writing on the wall.

What horrified me was the idea that much of this destruction was planned ahead of time, including the obliteration of the middle class. Meetings were held, memos were written, laws were changed. “Economic royalists” effectively rule this country, says Hartmann, who gives examples of all of this.

Instead of a strong middle class with enough money to purchase goods and services, we now have a small wealthy oligarchy on one side and a growing class of people getting poorer by the year on the other.

Hartmann includes an interesting chart from the Economic Policy Institute that compares, graphically, the rates of productivity and wage growth between 1947 and 2010. The two indicators separated dramatically during Ronald Reagan’s presidency. Since then worker productivity has increased significantly while wages have stayed essentially flat. When the Reagan tax cuts were implemented, corporate profits now went to CEOs who paid less in taxes than previously, rather than to the workers on the line.

Where to Point the Blame?

Clinton gets the blame for the upside-down balance of trade by removing protections for America’s domestic manufacturing industries. George W. Bush oversaw, not just the entry into two bankrupting wars, but also the deregulations leading to banking panics and bailouts and the housing meltdowns that lost people their homes and jobs.

President Obama, who began his term with such high aspirations, has been the object of a detailed opposition plan to derail any reforms he might put forward to help the middle class in America.

Hartmann says, “With the help of prominent media outlets, the Royalists, now a political minority, would engage in a scorched-earth strategy to defeat a coming Progressive Revolution, even if it meant crashing the United States as we know it.”

As Hartmann points out, any foreign company, organization or government could, theoretically, form a U.S. corporation and, thus, influence elections through massive amounts of advertising. He points to Justice Stevens’ 99-page dissent of the Citizens United corporate personhood ruling, where the judge suggests that “the majority of the court had just handed our country over to any foreign interest willing to incorporate here and spend money on political TV ads.”

Thom Hartmann sees the reversal of this decision as one of highest importance (after the crash, when people come to their senses).

Hartmann’s main point is that we no longer have a democracy, as we once knew it. The strings are being pulled by concerns for self-interest, rather than the public good. The pocketbooks of the puppeteers hold more wealth than most countries’ GDPs. And it may be too late to reverse the situation before it all comes crashing down.

The good news? According to the previous 80-year cycles, the crash will wake people up. Some of the awakening is already taking place. In December 2011, for example, the city of Los Angeles called for a constitutional amendment to end corporate personhood, saying that money was not the same as free speech. Hartmann recommends returning the Supreme Court to its “original” constitutional authority, which it has overstepped.

Fundamentals necessary for a strong middle class need to be addressed as well, including health care, investing in bridges rather than bombs, strengthening the job situation, reducing debt, adjusting the tax codes, decentralizing the power systems, and reclaiming the “commons” of the country, which are currently being sold to corporations at less than their worth.

One suggestion that resonated with me was the concept of co-operatives. Hartmann’s examples of this trend were encouraging and I’ll be researching that topic in some detail.

Thom Hartmann doesn’t portray what life will be like during and immediately after “the crash of 2016,” though he gives clues with his observations of the previous three cyclical crashes. It won’t be pretty, at any rate.

Will we be fighting in the streets over food? Who of us will be living in tent cities? Or garbage dumps? When our money is worthless, what do we have to barter for the necessities of life?

Or do you think everything can carry on as it has been? Has the tipping point been reached? Or will we pull ourselves together to make/demand the necessary changes in the nick of time.

Life in the 21st century…

Read more reviews of The Crash of 2016 here.