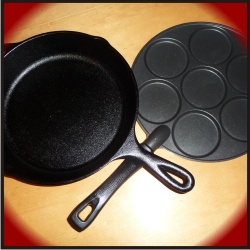 A couple of years ago, I went on a frying pan quest, when pancakes became an important food group in our soft foods diet. A dental appliance put soft pancakes front and center… but I didn’t have the right kind of pancake pan for the two types of pancake recipes I wanted to make.

So I checked the frying pan reviews at Amazon.com and ordered what I thought would be the perfect frying pans for both the 3-inch Swedish pancakes and the baked Pannukakku – Finland’s traditional oven pancake.

I had one hit… and one miss (sort of). HINT: You can see evidence of the scratches I made in my brand new Swedish pancake pan in the photo below.

Let me tell you about my adventures in pancake pan land.

I bought this pan to cook Swedish pancakes

When I was a kid, my grandmother, my mother… and then my sister and I… loved to cook and eat plates full of the small 3″ Swedish pancakes. I always thought they were a Finnish delicacy, since my grandparents came from Finland, but I later learned they were actually called “Swedish” pancakes.

When my son recently needed to eat a soft foods diet for a month, I found a box of Lund’s Swedish Pancake Mix that tasted very close to the pancakes we ate at home, all those years ago. But when I dropped batter from a tablespoon into my regular non-stick frying pan, the pancakes kind of spread out in ungainly shapes and I just kept wishing I had my mom’s old Swedish pancake pan. It looks like the one in the photo here (it’s the pancake pan I purchased from Amazon). But hers and my grandma’s were cast iron and my sister got my mom’s pancake pan after she passed.

Because I was making these soft, silky pancakes a couple of times a week, I really wanted the right kind of pan, so I took myself off to Amazon (which usually has the best deals on these items) and started reading the reviews.

There were actually 4 Swedish pancake pans available – they’re also called “Plett” pans. But one was way too expensive and another had a 2-star review. So I narrowed my choice to the other two.

I chose the Nordic Ware lighter weight pan over the cast iron Plett pan because of the Amazon reviews. At the time of writing, the pan I’m reviewing here had 165 five-star reviews, 47 four-star reviews and only 22 one and two-star reviews.

The frying pan arrived within two days (I love Amazon Prime) and I’ve made Swedish pancakes with it once, so far. I’m still using the Lund’s pancake mix because it’s so doggone easy and tasty, but I also posted our family pancake recipe on my Swedish Pancake Recipe Page if you’d like to take a peek at it.

I wouldn’t rave about it, but it does cook the pancakes just fine. What gave me a problem was… the “care and use” instructions were hidden on the inside of the cardboard cover thingy, in very small print. The part I missed said, “Flip each pancake with a non-metal utensil… we recommend wooden skewers or chopsticks, a small silicone spatula or a plastic fork for flipping.” If you follow these instructions (like I didn’t), you’ll have a pretty good Swedish pancake pan with a 10-year warranty.

Mine, on the other hand, is already scratched. It’s my own fault… but it would cause me to give Nordic Ware a less kind review than if they had put their instructions where I could have seen them more easily.

The only other issue I had with the pan was a slightly loose handle, but I was able to tighten it easily with my screwdriver.

I have not purchased the Norpro cast iron plett pan that Amazon sells because its reviews were less than stellar. I thought about it, because it’s cast iron, which is what I’m used to cooking Swedish pancakes in. But, for now, I’m looking a little farther afield; I’m searching for a cast iron Plett pan on eBay

hoping to find a vintage pancake pan similar to the ones my grandmother and mom had.

I’ll keep you posted on my pancake pan quest and will review the new pan here, after I figure out which one to get.

And now for the rave review!

My new Lodge Logic 10-1/4 inch cast iron frying pan came the same day as the Nordic Ware Swedish pancake pan. I bought the cast iron pan in that size because that’s what my recipe card for Pannukakku – Finnish oven pancakes – said to use. And I didn’t have one.

If you’ve ever researched cast iron cookware before, you might have noticed the rave reviews given to the Lodge Logic product line. From my experience so far… these reviews are well justified.

I followed the recipe on my card exactly as written and was so happy with the result that I immediately made a special Pannukakku page dedicated to the recipe and this page you’re reading extolling the virtues of Lodge Logic for cast iron cookware.

My new cast iron pan came pre-seasoned. Many of the Amazon reviews said to scrub off the pre-seasoning and re-season with a variety of different methods, depending on whose review you read. I took Lodge Logic at their word and left the “store-boughten” seasoning on. You can see from the photo above that my pancake batter didn’t stick one little bit. The recipe is primarily an egg, flour and milk batter baked in the oven; my expectation was that something would be stuck on afterward. But it came out clean as a whistle.

All I had to do was wash the pan in hot water, paper towel dry and wipe another paper towel around the inside with a bit of canola oil on it. The Lodge instructions for use were a lot easier to find, too.

Now that I’ve had such a good beginning with my new frying pan, I’ll be using it every day. The non-stick pan I’m using now has lost some of its coating and I think my new frying pan will be a bit safer to use. I also plan to add to my inventory of Lodge Logic cookware.

I bought Lodge Logic over the other cast iron frying pans available because it had an average rating of 4.5 stars from 4,534 reviewers. And that was 3 years ago.

Click here to learn more about my Lodge Logic Skillet

How to season a cast iron skillet – Important information to know

I wasn’t careful enough with my previous cast iron frying pan… and I ended up pitching it before we moved to our new apartment. I’m much more conscientious about re-seasoning my new Lodge Logic pan after each use.