I read The Hunger Games trilogy from two perspectives: that of senior citizen… and also a 1960s hippie. I was impressed on both counts. 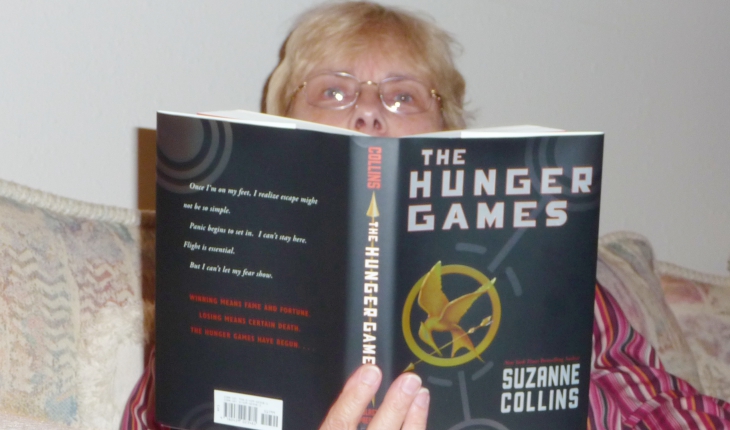 I may be a senior citizen now, but I’m also a counterculture hippie-type person from the 60s. So I read and then reviewed The Hunger Games trilogy from two perspectives. Old fogey me and rebel hippie me. Quite a head trip, I can tell you. In other words, these aren’t your ordinary cookie cutter-type book reviews.

One viewpoint says, “Why rock the boat? I’m on social security, for heaven’s sake!” The other side of me doesn’t like what I see happening in society today… any more than I did in the sixties.

Did The Hunger Games books awaken that? Or did I choose to read the trilogy because of that?

And another thing… I usually get my books from the library. I actually purchased ALL 3 books in this series, because I couldn’t wait for the library to catch up with my reading.

Why this book got me thinking…

The Hunger Games begins a little slowly, actually. So slowly, that I had to ask my son if it picked up some once I got into it. “It’s a good book, Mom,” he assured me so I kept reading. And found my head twisting round and round with the bizarre turns of events that kept showing up.

The books could be classified as Science Fiction or Fantasy, and I wonder if author Suzanne Collins is a bit of a mystic herself. Like J. K. Rowling, whose Harry Potter books books hit a chord with kids and adults alike… Collins portrays circumstances and characters that we all recognize… or that we live within. The controlling, centralized institutions, the hard-scrabbling general population, the very young who recognize injustice when they see it and, thankfully, haven’t yet made themselves “put a lid on it” as their elders have done.

The Game of Thrones series is also heading in the same direction, where the youngsters are the courageous ones who are willing to risk, well… anything… to make things right again, while the adults are hanging on for dear life to whatever they have left.

A prophetic view of our future?

I wondered if the books were written as reminders not to cave in to lemming mentality… even though it’s easier. When we go along with things – even though they don’t feel right to us – a piece of our integrity gets chewed off. Do young adults have enough experience yet to know this? They are the intended audience for The Hunger Games, after all.

The books also drive home a couple of other points: when we ignore the suffering of others and hide behind our shutters, we lose a bit of our humanity. And when we let ourselves be walked all over by our governments and public institutions, there goes our freedom out the door… in fiction and in real life.

Katniss Everdeen, the young heroine of The Hunger Games hasn’t yet had the training to stifle her sense of what’s right. Luckily, she’s a plucky thing and paid attention when her dad taught her to use a bow and arrow. She’s responsible for feeding her family most of the time, even as a young teenager. She has learned a few survival tricks that serve her well at the Hunger Games, where it’s every person for himself until you’re the last one standing… literally.

The Hunger Games are just that – annual events with untrained, unwilling “gladiators”… who are forced to participate in a cruel tradition meant to keep the general population under control. At the same time the games provide bloodthirsty entertainment for the privileged classes of the Capitol… the seat of power of Panem, a geographic area previously known as North America. Each of the twelve districts of Panem is required to send one male and one female “tribute” to the Games, where they will need to fight tooth, nail, claw and hammer to stay alive. Their ordeals are unimaginable. Their courage unbelievable.

The Hunger Games got me thinking… and remembering. The marches for peace and civil rights. The non-violent methods of Martin Luther King, Jr. The counterculture thinking of the 1960s. And I wondered what happened that so much of it has slipped away in the name of… what? Security? Or maybe lack of energy from the aging process?

Where did our – MY – rebellious spirit go?

Reading The Hunger Games brought some of that back to me.

This old fogey is starting to remember. And so, it seems are a few others. “Occupying” is not a new idea at all. Many of us remember taking part in “Sit-ins” way back when.

On the other hand, maybe the fascination with “young adult rebellion” books is just a cyclical thing, where younger generations have to push against the status quo regardless of the reasons why.

I don’t know… but it seems that the books are hitting home with the older generations, too. Or perhaps Suzanne Collins is just a great adventure writer and once the story’s over, we go on to other things.

Catching Fire starts up where Book 1 left off. Katniss and her Hunger Games partner, Peeta Mellark, are back in their District – Number 12 – thinking to live the good life… for the rest of their lives.

Well, whatever’s left of their lives, at any rate.

Katniss is well aware that she is in disfavor with the powers-that-be in the Capitol and that they will stop at nothing to destroy her. But even she couldn’t have imagined what they had in store for her.

If you have not read the books yet, I ain’t givin’ away the plot, sorry. But your jaw will drop and your heart might flutter some when you see the lengths to which the status quo will go to when threatened.

Catching Fire – even more than The Hunger Games – stirred the rebellious spirit within me, as I witnessed (in my mind) the courage of people with nothing left to lose. There’s always a straw that breaks the camel’s back, whether it’s a tax on tea or making people face the severest horrors imaginable – twice.

So rebellion spreads in the districts, fueled largely by the intransigence of young Katniss, whose actions in Book 1’s Hunger Games have triggered an uprising she hadn’t intended.

The ending of Catching Fire caught me by surprise.

When I reflected back a bit, I remembered little snippets that gave tiny clues as to what was going on beneath the surface, but, because the books are written from Katniss’ perspective and understanding of events, I didn’t figure things out any better than she did.

And Katniss, having been left out of the secret loop on purpose, is ticked, royally.

And on that note, the second book ends. Our young rebel is rebelling against the rebels.

And now it’s on to Book 3 Mockingjay to see where it all leads.

You must read Mockingjay to complete the series… but it hurts

On Amazon.com, the book Mockingjay has much lower ratings than the first two books in the series. There are a couple of reasons for this. After the long build-up in The Hunger Games and Catching Fire, the climax in Mockingjay winds the series downward with outcomes that most of us wish hadn’t happened.

The agonies suffered by Peeta and Kinnick, for example… two stalwarts we’d grown to respect and maybe love. The loss of so much life in the name of revenge. Katniss knew her rebellious actions might cause trouble for a lot of people, including her family, but even she wasn’t prepared for what happened in the final assaults on the Capitol.

The second reason I think the reviews were less enthusiastic for Mockingjay is the many pages devoted to Katniss’ inner anguish and introspection. In the first two books, she is larger than life – the type of heroine you’d see in an action movie. In the third book, Katniss turns inward much more. She second-guesses her motives, loses hope and becomes depressed to the point of stupor.

Katniss’s final act of rebellion is one that should have ended her life. It didn’t, but the Katniss we got to know is gone forever. And readers didn’t seem to like that one bit.

The epilogue seemed like a throwaway to most readers, myself included. Those two pages more or less stripped the life out of the story at the end. On the other hand, we didn’t have to live through two sets of Hunger Games and, from Katniss’ perspective, perhaps safe and normal felt more like “life” than facing death minute-to-minute as the girl who kept “catching fire.”

For me, Mockingjay was the most gut-wrenching of the three books in the Hunger Games trilogy. It asserts Suzanne Collins’ anti-war message the strongest. So I’d give Mockingjay higher marks than most readers, because the author reflects my thinking so well in this.

I hope you’ll leave your comments about the series below. Am I off the mark… or on?

As each new movie in The Hunger Games trilogy comes to theaters and then to DVD, interest in the series is renewed. If you have not read the books yet… or held off, like I did, thinking they were about violence without reason, I hope my reviews have encouraged you to view the books in a new light.

I originally wrote these reviews in 2012, the year I finally read the books. This article appeared first on Squidoo, then Hubpages and has now migrated where it belongs – on BarbaraCasey.com.