“Think Like A Freak” by Steven D. Levitt and Stephen J. Dubner 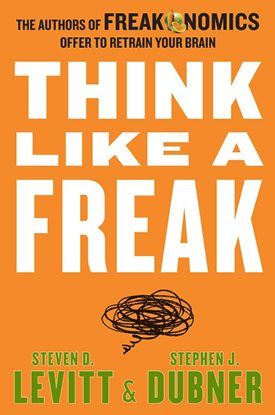 If you’ve read the Freakonomics books, you’ll know that “thinking like a freak” often means going against conventional wisdom. This new book – Think Like A Freak – hammers home the idea that our biases and current set of beliefs color our decision-making more than we know.

And it’s not always easy to change the way we think.

Consider the concept “moral compass,” which many politicians refer to when they attempt to control masses of people with their way of seeing the world. Is emotion the “right” way for elected officials to make decisions that could affect millions of constituents, many of whom may not agree with their rulers’ assumptions?

The authors look at everything from health care to economics, advertising, wine-tasting, hot dog eating contests, school performance and more… demonstrating how we tend to place barriers or limits on what we think we can do, because “it’s always been done that way.”

They challenge us to change our way of thinking by giving examples of people who have broken through commonly accepted limitations to make names for themselves. They also illustrate their ideas with concrete statistics that turn our heads away from the “easy” answers.

For example, the homicide rate in the United States began to fall in the 1990s, after reaching historic levels around 1980. Common wisdom might suggest that the causes for the drop in homicides were more police officers, increased prison sentences, more capital punishment or a surging economy.

The authors, however, identified another factor: the legalization of abortion in the early 1970s. They theorized that, with fewer unwanted children being born, fewer children lived in the types of circumstances that might lead to criminal activity. Thinking “like a freak” meant going an extra step to find a possible root cause of a problem. Along with an unanticipated solution to it.

Some root causes go back centuries. Even the causes of illnesses and disorders that only affect specific segments of the population. They give examples and slightly hair-raising remedies. Fascinating stuff, including fecal transplants.

Who would have thought that poor eyesight affects one in four children in the world… and that “problem learners” can often be turned around with a simple pair of eyeglasses?

Conventional wisdom might have said that class size, bad teachers, or out-dated text books caused the problem when, at a closer “freakish” glance, it became apparent that the children just couldn’t see the blackboard.

As Levitt and Dubner consistently point out, changing people’s ways of thinking means first finding out what really matters to them, not what they “say” they care about. The trick is to change the “default” settings of our beliefs. To stretch our mental options. To switch perspective.

Is Quitting Better Than Toughing It Out?

The last chapter of Think Like A Freak affected me the most. It’s called “The Upside of Quitting.” What do you do when your work isn’t fun anymore? Do you hang in for the benefits, go back and live with your parents, or find an alternative area in your field that might interest you more?

Or… do you let go of the obvious routes altogether? Let go of conventional wisdoms; let go of artificial limits that hold you back; let go of fear of change, and just… well… go.

When it stops being fun… quit.

As Levitt and Dubner point out, using themselves as examples, quitting doesn’t necessarily lead to misery. And sometimes it’s okay to just flip a coin when you’re making big decisions. It keeps you on your toes… and free of mental chains.

They claim repeatedly that “I don’t know” is one of the most freeing sentences there is.

I don’t know what my next career move is, either. But having expressed that thought to myself, ideas have started jumping in like rabbits. What I thought I was going to do is back on the table and I’m allowing myself to climb out of that box.

I’m allowing the feeling of fun to be part of the equation. As the authors frequently mention, fun is important, “because if you love your work… then you’ll want to do more of it.”

Read the reviews for Think Like A Freak on Amazon.