Zero to One: Notes on Startups by Peter Thiel

“Every moment in business happens only once,” says Peter Thiel in his preface to Zero to One: Notes on Sta 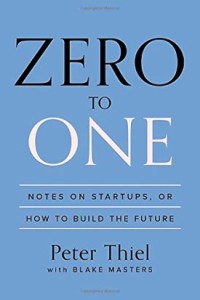 rtups, or How to Build the Future… and if you’re copying Bill Gates (Microsoft), Larry Page (Google), or Mark Zuckerberg (Facebook), you’ve missed the point.

For most people, it’s easier to copy what’s already been done. In fact, most businesses do just that, adding nothing much new or unique to the marketplace while they spin their wheels in competition with other copycat busi
ness owners. Digging deeper ruts until they throw in the towel.

According to Peter Thiel, this rather boring business model is what’s currently being fed to business startups who kid themselves that they have something valuable to offer humanity, as they attempt to copy the Gateses, Pages and Zuckerbergs, who actually did have something to offer.

Not to forget Peter Thiel’s own startup company, Paypal, whose mission was to create a new digital currency that would be controlled by individuals instead of governments.

That’s the kind of forward-thinking uniqueness that Thiel promotes in his new book Zero to One.

Thiel suggests that all business founders should first ask themselves these questions:

Think Apple, think Google, think Facebook, think Paypal. Each company was so far ahead of current thinking that they added entirely new consumer and business categories to the world. Peter Thiel’s contention is that a company standing on top of the mountain because of its high standards, excellent products, over-and-above customer service, and creative distribution methods is essentially a monopoly of one. And that’s a good thing.

If only more business startups would try it.

The type of company Peter Thiel proposes would have its own proprietary technology, a network of people who are easy to reach, a built-in design for handling many customers, and a branding plan. Starting small, getting very good at what they do, building word of mouth buzz with real users, having a vision for the future and a plan to get there are the ingredients for successful business building, if you want to create real value and not just expand on what’s already been done.

Peter Thiel’s way of thinking is vaster than my own, of course. He deals in billions of dollars and heady ideas. Me… I’m a home-based blogger with a part-time job. But that didn’t stop ideas from jumping around my mind as I was reading the book. They’re still flying in and out, looking for a place to land.

At my level of business, I’m not accustomed to dreaming such big dreams. But even as a home business person, in a small niche, I can strive for the excellence Peter Thiel is advocating. I do love his idea of creating new things what will make the future not just different, but better. Or as Peter Thiel would say, “to go from 0 to 1.”

Read more reviews for Zero to One here.